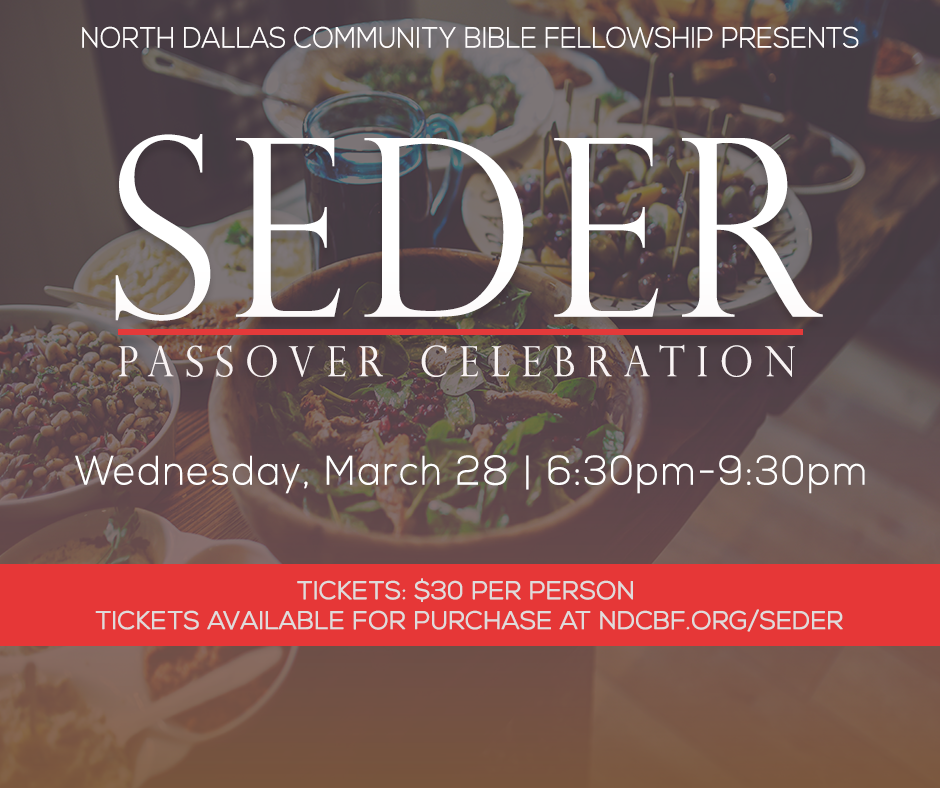 Experience the freedom of passover this Easter! The passover seder is an honored jewish tradition complete with a traditional passover meal, dinner, music, and so much more! Join us for a Seder experience your family will remember for a lifetime!

**Seating for the Seder is open. There will be no reserved seating or tables. Please arrive early and with your entire party to ensure preferred seating.

What is Passover?
The festival of Passover has been celebrated by Jews for thousands of years. It is the telling of the great story of how God redeemed the Jewish nation from enslavement in Egypt. It is a ritual which is lead by the father or head of the assembly with the use of a common Haggadah.

What is a Haggadah?
It is a book used to help the assembly to follow the pattern of the Seder, the Passover service held in Jewish homes. The book is a liturgy which includes many prayers and blessings.

When was it first observed?
The festival itself was given to the Jews while they were still in Egypt. The original celebration centered on the Passover lamb. The lamb was sacrificed and its blood put over the doorposts as a sign of faith so the Lord would Passover the houses of the Jews during the last plague poured out on the Egyptians - the killing of every firstborn.

How did Jesus celebrate Passover with His disciples?
Three times it is recorded in scripture that Jesus celebrated Passover with His disciples. Jesus presided over the ceremonies and enhanced the Passover symbols giving additional cause for gratitude and thanksgiving. Passover, the season of Israel’s liberation from bodily slavery, was transformed into a season of spiritual regeneration and redemption, whereby man could be freed from the slavery of sin. The last Passover Jesus celebrated, or as we call it the last supper, He proclaimed that the meal represented Himself and He was instituting the New Covenant.

How does the Passover lamb represent Jesus?
Four days before the Passover sacrifice, a lamb was chosen. This was the day Jesus entered the city of Jerusalem. The Jewish people did not understand the significance since they greeted Him with palm branches and hailed Him as King, shouting “Hosanna”, which means save us. The Passover lamb was to be a male, without defect. The whole assemblies of the congregation of Israel were to kill their lambs, this was not done by a priest. Everyone was to witness and be responsible for the death of the lamb. The priest would blow the shophar horn at 3:00 p.m. - the moment the lamb was sacrificed, and all the people would pause to contemplate the sacrifice for sins on behalf of the people of Israel.

What is the significance of the ceremonial elements?
Christian symbolism in the Passover occurs early in the Seder. Three matzahs are put together (representing the Father, Son, and Holy Spirit). The middle matzah is broken, wrapped in a white cloth, and hidden, representing the death and burial of Jesus. The matzah itself is designed to represent Jesus, since it is striped and pierced, which was prophesied in the Old Testament. Following the Seder meal, the “buried” matzah is “resurrected”, which was foretold in the prophecies of David.

Why are we celebrating Passover?
Jesus, our example, celebrated with His disciples and friends. To celebrate it today we begin to understand God’s great love and His redemptive power over death. The believer finds deeper significance and understanding in experiencing the customs of God’s people, Israel, in the light of salvation in the Messiah. These things are relevant to our faith, not in opposition to it. We gain no merit with God in observing the festivals; but if we ignore them, we miss the blessings of a deeper appreciation of the heritage that is the cradle of our faith and subsequent salvation.

What type of food will be served?

We will enjoy a wonderful meal. In addition, we will also enjoy a traditional Seder plate consisting of: